Preserving (or Saving) our Environment

Preserving (or Saving) our Environment

Recently I gave a presentation and, as I have done many times before, I referred to Carl Sagan’s description of earth as a Pale Blue Dot. 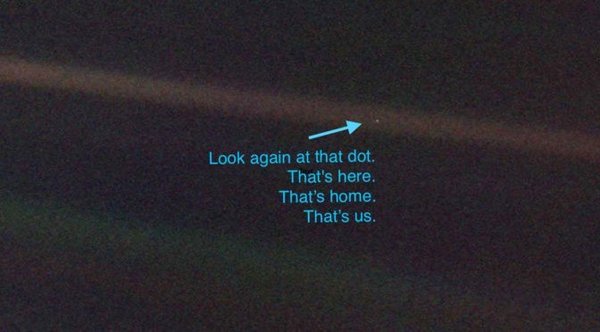 I have added the first few words from Carl Sagan and pointed an arrow to where Earth is.

This photo was taken at Sagan’s suggestion that as Voyager 1 left the solar system, it should take a photo of the Earth. Voyager 1 was about 6.4 billion kilometres from the Earth and in the photo Earth appears as a tiny point of light, and only 0.12 pixel in size.

You can read Sagan’s famous description of the Pale Blue Dot here. There is also an official video.  The scenes in the video and Sagan’s humble speech helps put us, humanity, into perspective.  It is only a few minutes long and worth your time.

Sagan is not saying save the planet. He is just putting humanity, and our insignificance, into perspective.

As I understand it, two features separate us from all other mammals and all other species: a much larger brain and, like most primates and some other animals, we have opposable thumbs. However, we humans can move our thumb farther across our hand than any other primate and our larger brains can take advantage of greater dexterity provided by our opposable thumbs. While this means we may be the most sophisticated species on the Earth, we are insignificant in terms of the universe.

Nevertheless, are we collectively intelligent enough to save ourselves and millions of other species from ‘Climate Change’?

We do not need to save the planet. What we need to save is the environment.  There are many different types of ‘environment’ but here I am going to concentrate on the two that I think are most relevant to the future of humanity – the natural environment and the artificial (built) environment.

The artificial environment is anything that has been created by humans.  This includes buildings, agriculture, dams, rerouting rivers, pollution, etc.  Even acts that seem less extreme, such as building a mud hut or a photovoltaic system in the desert, mean the modified environment becomes an artificial one.

Humans have used our intelligence to artificially extend the range of environmental conditions that we can survive, from the depths of the ocean to the moon.  However, we consume Earth’s resources in a non-sustainable way (see my previous article referencing Earth Overshoot Day).

These species may have survived for a short or long time.  Their extinction could be caused by a wide variety of reasons e.g. a massive flood, a prolonged drought, or some other sudden event that changed their habitat and they could not adapt or migrate quickly enough. There have been five major global species extinction events.  These occurred for a variety of reasons, the principal cause of some are still not fully known.  The most famous extinction event was the meteor that was the probable cause of the Dinosaurs’ extinction.

However, human activity, and the built environment in particular, is responsible for the current extinction event.

The major determinants in how a species will survive locally, or in a climatic region, or continent, or globally depends upon the range of environmental conditions to which the species can adapt.

Before human activity, the Earth experienced many hotter and colder environmental conditions.  Those species that could adapt survived.  The ‘space’ left by a species that became extinct would be filled by a species that adapted or a new species would evolve to take their place.  The more rapid the rate of change in an environment the more dramatic the extinction rate of species.

Our burning of fossil fuels to provide the energy we need to expand our economies is causing the extremely fast rise in Earth’s temperature.  This temperature rise is causing a change to the environmental conditions all over the Earth.   This ‘climate’ change is happening rapidly and is detrimental to most species as they do not have time to adapt.  The result will be an accelerating loss of biodiversity, and accelerating loss of species.

A simple example is bees.  We are losing bees at an alarming rate.  Consider a world without bees:

In the second half of the century, I think the global economy will split into two ‘environmental’ tiers:

So, we need to minimise the disparity between these two environmental tiers and preserve the environment for future generations of humanity and for all different forms of life that share this Pale Blue Dot with us.

As the most sophisticated species on Earth, it is our responsibility to make sure this happens. Let’s pull together to find intelligent solutions to preserve our environment, before it’s too late.

Visit https://www.iesve.com/icl to find out more about the solutions IES have developed to play our part in preserving the environment for generations to come.