Postcard from Abroad - An Irish Engineer in North America

This article was originally published in Building Services News Magazine. ‘Postcard from Abroad’ is a regular feature that highlights the experiences of graduate engineers from Ireland that have gone on to live and work abroad.

It is a pleasure to share my experiences abroad with you as a building services engineer who left Dublin in 2008. During the past seven years I’ve been working all over North America as a project manager and business development manager with Integrated Environmental Solutions Ltd (IES).

Many of you will be familiar with IES Ltd and IESVE software, which is used in Ireland and the UK for building performance simulation and analysis of buildings. Typical applications for using IESVE software are often necessary for new construction projects in Ireland, e.g. Part L Compliance. However, things are quite different in North America.

I graduated from DIT Bolton Street’s building services engineering course in 2006 with a 1st Class Honours Degree having come up through the diploma courses which was hugely valuable to me, even today. White Young Green (WYG) were generous enough to give me a start as a graduate building services engineer in 2006 as I had also gained valuable work-experience during the previous summer with them.

IES opened an office in Dublin in 2007 and I was keen to join with such an innovative and ever-expanding company. At the official Dublin office opening I met Dr Don McLean (IES founder and CEO) and walked away inspired by his enthusiasm for making a difference in the world by way of sustainable building design through technology.

While working in the IES Dublin office I was fortunate to work on some great consulting projects for the Office of Public Works and a few international projects too in the UK, the US, Australia and the UAE. These international projects gave me an appreciation for building performance benchmarking under different codes and standards. I also began to understand what real sustainable design meant versus making design decisions simply to play the system, or simply in order to “get the certificate”.

At IES a huge portion of our activity is driven by various energy rating systems. In North America, those rating systems can often be voluntary (eg LEED) depending on the region or building owner. You need to know your IECC / ASHRAE Standards as much as the local rating systems. This complex challenge was one of the reasons I moved to work in the IES Boston office in 2008. Six years later, I would move west again.

Settling into life in Boston
I was lucky in three areas: visa, work and accommodation. First, if you move to the US to work (outside of a J1 student visa) you will likely need either an H-1 or L-1 visa, although there are other less common options. The L-1 visa is essentially an intra-company transfer, so IES were supportive of the move. With an H-1 you could be applying to a new company, so there’s a risk involved for the employer. The one thing they have in common is the profound stress involved.

Second, with my work at IES, it was somewhat “business-as-usual” and I was performing a similar role to the one I had in our Dublin office, plus I already knew my colleagues (we are a tight-knit group at IES). Third, IES were generous enough to have a furnished apartment for me to move into. The view from my roof deck included the Massachusetts State House, the Charles River and Boston Commons.

Boston itself is a fantastic city with a large and welcoming Irish community. It is also a huge sports-centric city and there is always a Boston-based team involved in some play-offs. There are legacy neighbourhoods — the Irish are in Southie, the Italians are in the North End, there’s a Polish neighbourhood and, as always, a Chinatown.

Working in Boston was not without its challenges. There were the dreaded IP units, which at the time felt like being forced to learn how to speak Latin… why, oh why, have you not evolved? The toughest challenge was trying to convince a design team to consider something like mixed-mode ventilation, which was strangely considered a new concept.

I was shocked to learn how conservatively the New England AEC industry perceived high-performance building design. I was yearning for an equivalent to the EU’s EPBD or Ireland’s Part L. Years later, my role has evolved to encompass a much bigger region and I’ve had a chance to see how other locations embrace high performance design.

My role in North America today
Today, my region is ‘North America’. I’m not trying to be vague; below are green pins for each place I commonly work… 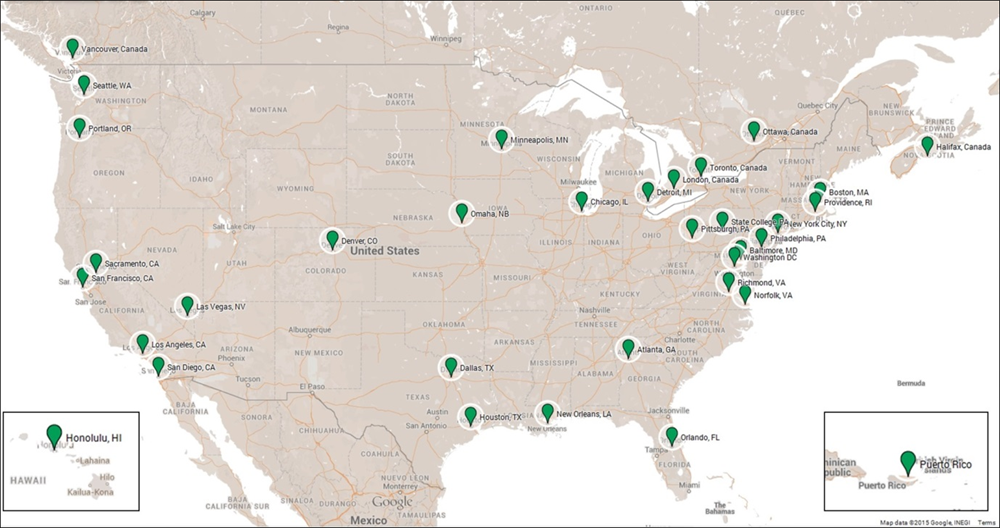 Yes, it is a massive geographical spread and involves a lot of travel, but that’s part of the business development challenge that IES has given me.

In my first six years in North America I was primarily focused on the East Coast, which I loved. I’ve had some interesting experiences along the way. For instance, one evening in Washington DC I went to see the White House and take in some US history. However, what I recall most clearly from that visit was looking up at one of the few snipers on the roof.

About 10 months ago I left Boston and moved west to the IES San Francisco office in order to support a new statewide compliance for building energy benchmarking. This time I moved with my girlfriend Alayne and dog Oscar. My work has mostly been focused on the west coast now, particularly in California.

The San Francisco Bay Area is still experiencing a huge tech-boom and there are constantly large volumes of people moving here. The apartment monthly rental costs are now $3,000- $5,000 (€2,750-€4,500). I feel sorry for the older locals of San Francisco who feel the artsy vibe to the city is now drowning with young techies.

It is a very different settling process on the West Coast. The time-zone difference to Ireland is now eight hours, there is a different culture to the harsh East Coast people and a different sense of humour. However, the AEC industry is an improvement. Sadly, 98% of California is currently categorised as being in “exceptional” drought, which is the worst level of drought and the worst in 163 years of record keeping.

You don’t need to convince anyone here about climate change. California has the most net-zero energy buildings in the US and there is a strict energy rating standard in place.

Earlier this year I was working with the US Navy in Honolulu. I took an opendoor helicopter tour over Pearl Harbour on my day off and got some excellent scenic photos. However, the ones that interested me most were of the endless rows of solar-panelled homes and buildings. In Hawaii, they pay $0.25- $0.33/kWh for electricity, so PV makes a lot of sense. Note: The US average is ~10-11cents/kWh. Just imagine being the odd-one-out in this neighbourhood.

Each place I go to is different and I’d sum up the US engineering culture as diverse and regional. In my day-to-day work I deal with various professionals including building physics engineers, architects, software developers, architectural engineers, contractors, energy modellers, mechanical engineers, and energy consultants. I also deal with lots of people involved in policy, from the Canadian Green Building Council to the California Energy Commission.

I’m very proud of my engineering background in Ireland and made sure to return to earn my Chartered Engineering status in 2010. I did a part-time Master’s degree in Brunel University in London during 2006-2009 but, if I’m honest, it didn’t compare to the education that DIT Bolton Street gave me.

Something a lecturer in DIT, Chris Montague, said always stayed with me: “The design team won’t consider it if you don’t speak up and suggest it.” Thanks for that Chris!

My final thought
While I combine lessons from both my training in Ireland and experiences in North America, there are cases that aren’t comparable. There’s always room for comparing and contrasting the different approaches to environmental engineering and building services, and I would encourage everyone to take the differences into consideration in any decision to move abroad. Overall, I’m glad I made the move west just over seven years ago and I’m happy with the work I’m doing in the US. However, I never could have excelled as much without my training and encouragement from home and from IES.